Articles with the tag: 3D Graphics

What I planned in the spec is now complete and ready for release. The GLSL shaders now work at version level 120 (compatible with OpenGL 2.2) in order to support older graphics cards.

What has been the point of the project?

Of course there are many features I still want to explore ...

Solving the angle problem: How to find the rotation between two vectors.

This solution is implemented in the Math class and will be invoked by the bezier curve-following IK method in the SkeletonNode class.

Given two normalised vectors, the cosine of the angle between them can be found using the dot product:

The rotation axis can be found using the cross product of both vectors:

The quaternion_from_axisangle() function likely uses trigonometry (such as the cosine function) to convert the given ... 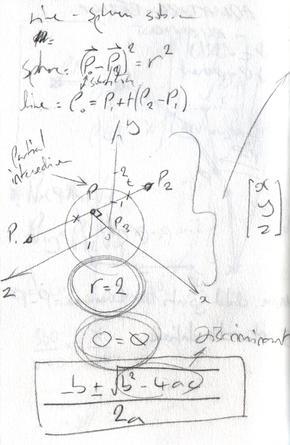 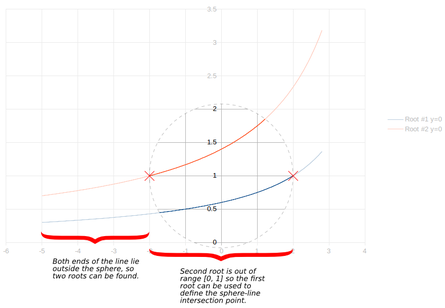 Looking at IK (Inverse Kinematics) solving techniques for interactive armature animation. IK works well in games when interacting with a non-branching chain of joints, say an NPC's arm. In the case of my demo character, the dragon's neck is a perfect example of where some form of IK can make a rigged character interactive.

Here is a Gradient-following method.

The direction of each joint to move in depends on the calculated gradient, either by moving the joint a bit ("Gradient by Measurement") or calculating the gradient directly using differentiation ("Gradient by Calculation").

I am presuming the second method's dot product returns a positive or negative gradient which denotes the direction the joint should move in.

Being a 3D simulation, each joint in my demo has directional freedom in the range of 0-360 degrees. In order to reduce the number of possible directions ...

ASSIMP just won't read my COLLADA file. Manually entering values from XML to see if the bone matrix values do anything. If so, can use an XML parser instead of ASSIMP.

Whelp, you can't reverse-engineer an XYZ-rotation matrix. Can try to use it directly, but that removes quaternion SLERP rotation.

Turns out you can:

Camera is inserted into SceneGraph so objects can descend from it (so they are relative to camera) and the camera can be stuck onto other objects, so CameraNode passes world_transformation matrix like any other.

However, camera also contains view_transform and can be grabbed by the Renderer using SceneGraph's Find command.

Similarly lights are in the SceneGraph, but can be grabbed by the Renderer for shading input. Not sure if shaders can be made to handle a varying number of lights.

If ModelNodes send things to Renderer... could lights send themselves to Renderer each time? It would have to be done as part of the update process. Must make sure Renderer/Shaders can handle arbitrary lighting before bothering to implement.

SceneGraph should have update() and update_all(). The latter contains standard code for updating the leaf nodes, and then the update ...