Bugs: First mesh to be rendered in Mouth Features node has no shading... Mouth features don't always load the first time (FIXED) Have to use SkinnedMorphMesh because MorphMesh is broken, or its resman loader is. (FIXED) Armature stops moving when the focus goes outside the window at certain times. Eyes and other features translated from the origin don't seem to be shaded properly.

Optimisation: I'm loading and rendering dragon character's mouth features (tongue, teeth, etc) as separate meshes. For lots of smaller meshes, it should be more efficient to put them all in one VBO to save a lot of buffer context switching each frame cycle. It should be theoretically possible to load the entire scene in one VBO, though there is a vertex limit. 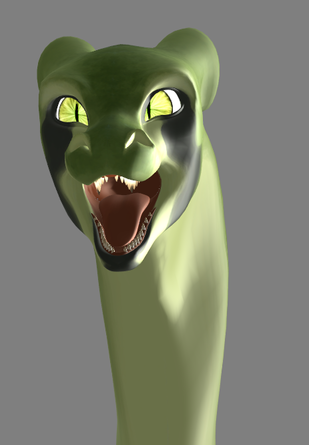 Features added and active. Not sure why top teeth and eyes are so bright.

Can do a lot more: needs a lot of memory and loading optimisation. I would also like to add another armature animation: the dragon snaps forward when the player clicks the mouse. That could even be turned into a game: the player has to have the dragon snap or breathe fire on some sort of enemy.