Possibly: A Game (framework) class which is initialised and called by the main() loop. But we'll see...

I don't necessarily want a new game environment all being created in main().

Each object will contain its own shader program, presumably. Pipelining might make this more efficient.

All inherit from GraphNode abstract (as in aforementioned project).

Hey, this kinda works for skeletons. Each bone inherits from a moveable bone node which keeps track of its own transformations. I reckon... they'd have to be graphs, though. This is very confusing.

Each node creates and maintains its buffers which are passed for drawing. 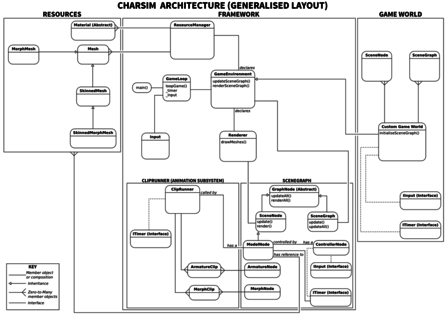